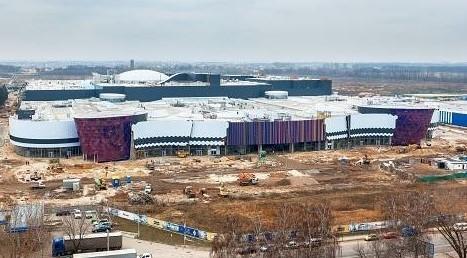 As evidenced by court materials (in the case of № 910/6295/16), Solteks Capital LLC and DKH Invest Nerukhomist LLC are negotiating the settlement of the debt dispute of UAH 1.22 billion "peacefully", according to their joint statement submitted to the Kyiv Commercial Court.

At the beginning of February 2019, Deposit Guarantee Fund sold to Solteks Capital LLC the rights of claim of Nadra Bank under loan agreements No. 37/2012-KK (borrower - Megapolis Zhytlobud LLC) and No. 2/1/2-1/2013/980-КЛ / 25 (borrower - DKH Invest Nerukhomist LLC) for UAH 2.6 billion for UAH 777 million (that is, at a 70% discount). The pledge for the respective loans includes the unfinished Respublika Shopping and Entertainment Center (located at the address of the city of Kyiv, Velyka Kiltseva St., 1, 1a, 1в; this project was associated with Dimitro Firtash).

Then First Deputy Head of the Ministry of Economic Development of that time Maksym Nefedov (now Head of the State Customs Service) reported that "there will be a separate auction for the sale of corporate rights on the object, they are pledged to the NBU" (quote).

Finbalance drew attention to the fact that in December 2018, i.e. shortly before the auction, the District Administrative Court of Kyiv satisfied the application of Megapolis Zhytlobud LLC and DKH Invest Nerukhomist LLC on waiver of the claim to the Guarantee Fund in Case No. 640/20827/18, under which the plaintiffs requested the court to oblige the Deposit Guarantee Fund to terminate the sale of Nadra Bank`s assets, namely the rights of claim under the above two loan agreements.

In December 2018, the same court in another similar case - No. 640/20828/18 (on the suit of Megapolis Zhytlobud LLC and DKH Invest Nerukhomist LLC against Deposit Guarantee Fund and Nadra Bank) - granted the plaintiffs` request to withdraw "as premature" the application on securing the claim by banning the sale of the said assets of the Nadra Bank by the Deposit Guarantee Fund.

According to the state register, the founder of Solteks Kapital LLC is Halieon Invest LLC, and the ultimate beneficiary is the British citizen Johnson Robert Alan. Until recently, the company`s signatory was Vasyl Astion (was a partner of Vitalii Khomutynnik in the Dnipro Agro Alliance LTD by the spring of 2018). Subsequently, Denys Lukashevych (partner of Yevhena Astion in Tolkfin, which also participated in the Deposit Guarantee Fund`s auction) became a signatory of Solteks Kapital LLC.

In June, the media wrote that Solteks Kapital is preparing to resume work on completion of the Republic Shopping and Entertainment Center.

In addition, on 22.03.2019, the NBU and the Cypriot company Pora Trading Limited (formerly Berlinotto Limited) filed a joint application to the court on postponing the consideration of the case No. 910/3980/16 in order to conclude a settlement agreement.

On May 18, 2017, the Commercial Court of Kyiv within the framework of this case satisfied the claim of the NBU and on account of partial repayment of the refinancing debt of the Nadra Bank decided to recover the share of Berlinotto Limited (Pora Trading Limited) in Megapolis Zhytlobud LLC, namely 85.19% of the authorized capital (amounting to UAH 29.1 mln), which was pledged to the NBU.

As the court records show, as of the end of August, negotiations for a settlement in the dispute were still ongoing. At the same time, on 21.08.2019 Pora Trading Limited appealed to the Court of Appeal, where it asks to cancel the decision of the Commercial Court of Kyiv dd. 18.05.2017 (although earlier, on 19.11.2018, the appeal proceedings in this case were opened by the complaint of Megapolis Zhytlobud LLC).

According to the NBU, as of mid-March 2018, Nadra Bank`s refinancing debt to the NBU amounted to UAH 9.8 billion.

According to the Guarantee Fund, as of 01.01.2019, UAH 3.7 billion (95% of the planned payments) was paid to Nadra Bank`s depositors within the guarantee amount.

Former Managing Director of the Guarantee Fund Kostiantyn Vorushylin said that Nadra Bank would not have enough collateral to settle the debt to the National Bank, let alone cover the USD 4 billion that the Guarantee Fund had paid to depositors within the guarantee amount.