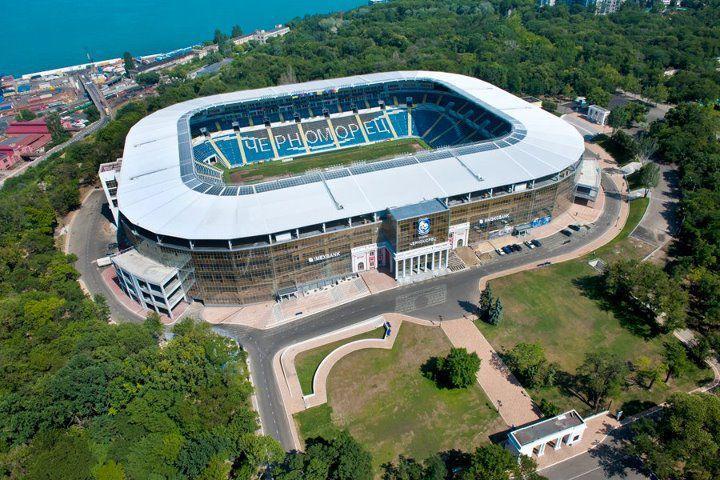 According to unofficial data of a Finbalance source, the auction of the Guarantee Fund for the sale of the pool of Imeksbank`s assets (including the Chornomorets stadium) scheduled for today did not take place due to the absence of bidders.

Besides the non-residential buildings of the Chornomorets stadium, located in Odesa at the address: 1/20 Marazliivska street, the specified pool also includes the rights of claim under the contracts which have been concluded with legal entities in the amount of 40 (according to the Deposit Guarantee Fund estimations, the indebtedness under them reaches UAH 12,7 billion, from them on a body of credits - UAH 7,3 billion, - ed.).

All assets are on the balance sheet of Imexbank and were offered in such composition for the first time. The initial selling price was UAH 3.67 billion.

The total area of non-residential real estate located in the historical center of Odesa, which is available for sale as a single lot - 80289 m2. Chornomorets stadium is the largest in the south of Ukraine. The complex of buildings and structures includes:


The auction was arranged by First Financial Network Ukraine LLC.

According to the Guarantee Fund, as of 01.01.2019 the depositors of Imexbank were paid UAH 4.2 billion (95.5% of the planned payments) within the guarantee amount. The total amount of accepted claims of the bank`s creditors is UAH 9.3 billion.

Deposit Guarantee Fund reported that the estimated value of Imexbank`s assets is less than 15% of the amount recorded in the bank`s financial statements: while "on paper" the value of assets included in the tender mass is UAH 14.95 billion, four independent subjects of the valuation activity estimated them at UAH 2.1 billion.

According to the Fund`s data, 90% of corporate loans in Imexbank are insider loans. It is about UAH 13.1 billion. The only collateral for half of the portfolio is the stadium in Odesa (Chornomorets).

Deposit Guarantee Fund stated that a few months before Imexbank was declared insolvent, highly liquid mortgages (including real estate near the sea) for 41 loans of legal entities-insiders were withdrawn from it. Instead, the only collateral under contracts worth UAH 8.3 billion was a football stadium, while independent appraisers estimated its value at UAH 1.2 billion.

The Fund specified that it received the Chornomorets stadium as a collateral for loans of related companies issued by Imexbank.

According to the NBU, Imexbank`s refinancing debt amounted to UAH 3.4 billion as of the middle of March 2018.

The National Bank stated that the relevant loans are secured by the Chornomorets stadium and a number of commercial real estate objects in Odesa.